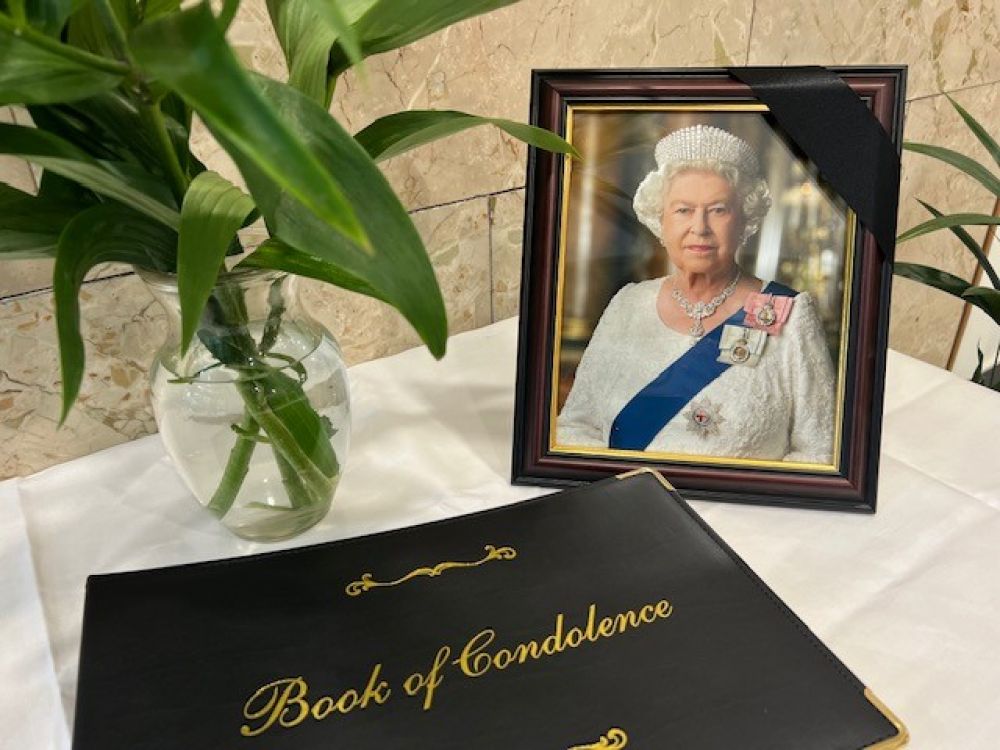 Arrangements are being made for the people of Enfield to pay their respects following the death of The Queen on Thursday 8 September 2022.

We will update this page as more information is made available.

A National Moment of Reflection will take place at 8pm on Sunday 18 September, the night before the State Funeral of Her Majesty Queen Elizabeth II, and will be marked by a one-minute silence.

The Mayor of Enfield, Cllr Doris Jiagge, is encouraging all residents in the borough to take part in a doorstep tribute during the moment of national reflection. Please join other members of your community at 8pm this Sunday evening to observe the silence.

Proclamation of His Majesty the King

His Majesty The King was proclaimed in Enfield by The Mayor of Enfield, Cllr Doris Jiagge, at 2pm on Sunday 11 September.

The Proclamation took place outside the front of Enfield Civic Centre. A photo album from the day can be found here

Sunday 11 September marked the day on which the Mayor of Enfield Council, Cllr Doris Jiagge, read the Proclamation announcing His Majesty King Charles III as the nation's new monarch. You can watch the ceremony in full here

Members of the public wishing to express their condolences, messages and memories can also send a message to the Royal Family via the official online Book of Condolence

Residents who would like to lay flowers in memory of Her Majesty The Queen are welcome to do so at the Civic Centre on the grassed area at the front of the building and the following places in the borough:

Forty Hall – Lawn outside of house (adjacent to lake)

The flags at the Civic Centre, other Enfield Council buildings and the War Memorials (Cenotaph) across the borough have been lowered to half-mast as a mark of respect.

The Church of England has created an online book of condolence. Submit a message and access other resources for prayer and worship services. You can also light a virtual candle. A Church Near You will be updated as and when local services are to be conducted.

St. Andrew's Church in the heart of Enfield Town is open for prayers, to light candles and a Communion on Sunday at 8am and 9:15am with the church staying open for signing the book of remembrance. They will aim to be open from 10am to 4pm from Friday 9 September until Friday 16 September. Check the homepage regularly for updated details.

Christ Church Southgate is holding a vigil service in words and music for the eve of Her Majesty Queen Elizabeth II's funeral. It will take place at 6.30pm on Sunday 18 September.

At St. Paul's Church Winchmore Hill there will be a special service of Choral Evensong at 6pm on Sunday 18 September, in thanksgiving for the life of Her Majesty Queen Elizabeth II. This service will last about 45minutes. On Monday 19 September, there will be a said Requiem Eucharist in the Lady Chapel at 8am, lasting about 30 minutes. The church will remain open for private prayer until 7pm.

Procession for the Lying-in-State of Her Majesty the Queen

The Queen's state funeral will take place at Westminster Abbey in London at 11am on Monday 19 September. The day has been declared a Bank Holiday across the UK.