How the money will be spent

In the coming year the council will spend £1,223 million, of which £139.4 million comes from Council Tax and £97.4 million from business rates. The remaining amount comes from government grants, subsidies, fees and charges, and other income. This includes funding for schools and payment of housing benefits.

The final budget took into account the feedback from the Budget engagement exercise, changes in government funding, local priorities, increases in demand for services and other increased costs. 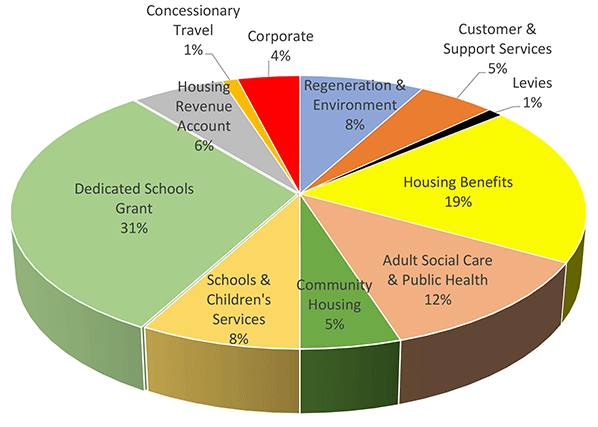 Your Council Tax also helps to pay for the Greater London Authority (GLA), which funds and runs the police, fire and transport services across London. Their costs are shown separately on your bill.

We charge Council Tax on most homes. There is one bill for each home, whether it is a house, bungalow, flat, maisonette, mobile home or houseboat, and whether the people living in the home own it or rent it.

Each home has been put into a band according to its value on the open market on 1 April 1991. The Council Tax Base for 2022/23 has been set at 96,369 band ‘D’ equivalent homes. Band D is the standard band for calculation of the Council Tax. The Council Tax for the other bands is calculated by following the rules laid down in the ‘Local Government Finance Act 1992’.

Your Council Tax bill will say which band your home is in. These costs assume two adults living in a property.

If you are entitled to Council Tax support, your bill will be reduced by a discount as shown on your bill.

Why has my Council Tax bill changed?

As a result, an average Band D property will see an increase in the Council Tax charge of 2.58% or £4.62 per month over ten monthly payments.

Enfield residents are charged Council Tax for the range of services offered by us. For more information, see our Council Tax page, where you can access information, including how much Council Tax you need to pay and who is liable. You can register online to pay by monthly direct debit, to tell us you are moving home, or check your balance and payment history.

If you believe you are entitled to a reduction or want more information on applications, see Council Tax discounts. You can also apply for any benefits you may be entitled to.

If you do not have access to the Internet, our Digital Champions are available to help you at:

The Mayor of London’s budget for the 2022-23 financial year sets out his priorities to support London’s recovery from the COVID-19 pandemic and to tackle the huge social, health and economic inequalities which it has exposed and exacerbated, and which have become even more apparent as a result of the current cost of living crisis. It supports job creation and London’s business community, our city’s future growth and economic success and the Mayor’s vision to rebuild London as a greener, cleaner and safer city with stronger and more cohesive communities.

This year’s budget will provide resources to improve the key public services Londoners need. This includes delivering more genuinely affordable homes, securing funding to seek to maintain the capital’s transport infrastructure and tackling toxic air pollution and the climate emergency. The budget also provides resources to support jobs and growth, fund skills and retraining programmes, help rough sleepers, invest in youth services and make London a fairer and cleaner place to live. Moreover, it prioritises resources for the Metropolitan Police and London Fire Brigade to keep Londoners safe, including violence reduction initiatives and ongoing support to improve opportunities for young Londoners. In light of the significant reductions in fares revenue and property tax income due to the pandemic, difficult decisions have been unavoidable. However, this budget remains focused on delivering a swift and sustainable recovery from the pandemic, as well as building the better, brighter, fairer future all Londoners want and deserve.

The GLA’s share of the Council Tax for a typical Band D property has been increased by £31.93 (or 61p per week) to £395.59. The additional income from this increase in Council Tax will fund the Metropolitan Police and the London Fire Brigade, and will also go towards ensuring existing public transport services in London can be maintained, meeting requirements set by the government in COVID-19 funding agreements. Council taxpayers in the City of London, which has its own police force, will pay £118.46.

The Mayor’s budget includes significant savings across the GLA Group in 2022-23, including £61m over five years through relocating City Hall from Tower Bridge to the Royal Docks. This has allowed him to release resources to help meet his key priorities. His budget includes plans to invest £4.9 billion to enable 116,000 affordable home starts within London by 2023 and an additional 35,000 by 2026, as well as allocating resources to tackle homelessness and reduce rough sleeping. He has already taken steps to improve air quality in London by introducing the Ultra Low Emission Zone in central London, which was expanded to the North and South Circular roads in autumn 2021. He has continued to roll out his Green New Deal for London to address the climate emergency, with the objective of helping to create jobs and to double the size of the capital’s green economy by 2030. This work is being supported in 2022-23 by the creation of a new £90 million Climate Emergency fund.

The Mayor will continue to ask the government to provide the maximum possible ongoing financial support to London businesses and Londoners as the capital emerges from the very severe impact of the COVID-19 pandemic. He will also maintain investment in skills and retraining to help tackle unemployment and support Londoners to secure better paid jobs, as well as supporting the advice sector to help Londoners impacted by the cost of living crisis.

The Mayor will also work with London’s business community, key investors and other stakeholders to support the economic recovery and ensure that London’s interests are protected following the UK’s departure from the European Union. He will provide funding for new projects to bring communities together, tackle social inequality and boost London’s economy, including supporting projects to help small and medium sized businesses.

The Mayor’s Office for Policing and Crime (MOPAC)

The Mayor published his draft Police and Crime Plan for 2021-25 in November 2021. This sets out the Mayor’s commitment to ensure London’s police service has the resources it needs to put more officers on the streets to suppress violence, including violence against women and girls, and to respond to the demands and pressures of policing a capital city. The plan also outlines the action the Mayor is taking to continue to hold the Metropolitan Police Service (MPS) to account, ensuring all Londoners have trust and confidence in their police force.

His key priorities include improving the MPS, providing a better criminal justice service in London and keeping children and young people safe. He will also provide resources to tackle domestic violence, which particularly affects women, and is increasing investment in violence reduction initiatives.

The Mayor published his Action Plan in November 2020 to improve trust and confidence in the MPS and to address community concerns about disproportionality in the use of certain police powers affecting Black Londoners. The Mayor has committed, as part of the Action Plan, to invest extra resources to develop greater community involvement in police officer training and in the recruitment and progression of Black officers in the MPS.

The MPS must rise to meet these challenges at a time of acute financial pressure. As a result of the net reduction in resources from the Home Office for policing between 2010 and 2019, the MPS had to close more than 100 police stations and remove over 3,300 Police Community Support Officers and 4,500 police staff in order to minimise reductions to front line officer numbers.

The Mayor is raising the police element of his Council Tax precept by £10 for a typical Band D property, as assumed in government calculations of police spending power. In all, through his decisions in this and previous budgets, the Mayor has funded an additional 1,300 police officer posts from locally raised revenues.

TfL has faced significant financial challenges as a result of the reduced levels of ridership due to the pandemic since March 2020, which has led to a large fall in fare revenues. The Mayor continues to work with the government to secure a sustainable long-term funding settlement for TfL to allow him to continue investment in the transport network while making it more reliable and accessible. The Mayor’s priorities for TfL, subject to funding constraints, include:

The LLDC was set up to ensure that the city benefits from a long-term legacy from the London 2012 Olympic and Paralympic Games. The Mayor’s 2022-23 budget provides funding to progress the construction of East Bank, one of the world’s largest and most ambitious cultural and education districts, in Queen Elizabeth Olympic Park. It will bring an additional 1.5 million visitors to the park and surrounding area each year, and more than 2,500 jobs will be created generating an estimated £1.5 billion for the local economy.

The OPDC has been established to support the creation of 65,000 new jobs and at least 24,000 new homes in west London over the next 20 years. It will build on the regeneration benefits which High Speed 2 (HS2), the Elizabeth line and the Great Western Mainline stations at Old Oak Common are expected to bring locally.

The tables below show where the GLA’s funding comes from and the reasons for the year on year change in the budget. It also explains how the GLA has calculated the sum to be collected from Council Tax (the Council Tax requirement).

The table below compares the GLA Group’s planned expenditure on policing, fire and other services (including transport) in 2022-23 with 2021-22. LLDC and OPDC are not funded from Council Tax.

The GLA’s planned gross expenditure is lower this year. This overall reduction is mainly due to the need to repay deficits in Council Tax and business rates income due to the impact of the pandemic albeit the Mayor has increased his proposed spending on services including policing. Overall the Council Tax requirement has increased because of the extra resources for the Metropolitan Police and the London Fire Brigade and to secure funding to maintain existing transport services including buses and the Tube network. There has been a 1.7 per cent increase in London’s residential property taxbase. Find out more about our budget by visiting London.gov.