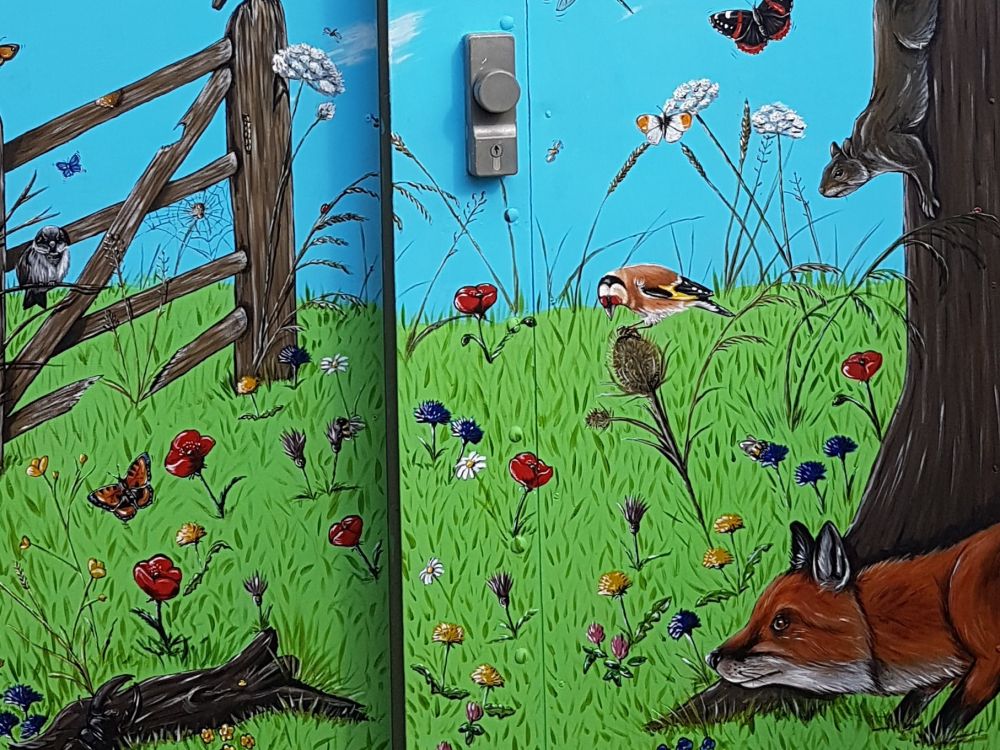 A wildlife artist has paid homage to the biodiversity of Bush Hill Park with a mural painting depicting its animals and plants.

The painting, by Michelle Sutton, was commissioned by the Friends of Bush Hill Park and supported and paid for by Enfield Council. It is hoped it will kickstart further educational projects about the splendours of the local environment.

To complement the mural, Michelle will create an educational factsheet  about the artwork, which will help people identify the birds, invertebrates, mammals and plants depicted – all of which can be found in the park itself. The Friends Group is considering how best to use the factsheet with local schools and other groups.

Enfield Council’s Cabinet Member for Environment, Cllr Rick Jewell, said: “A massive thanks and congratulations to everyone involved in this beautiful painting that will delight visitors, young and old. What I like most about this project is the educational element and the positive benefits to well-being.

“By nurturing an interest in areas such as Bush Hill Park, we can help a whole generation to take an interest in maintaining biodiversity in their local area and we can create powerful connections between them and the environment.”

Chair of the Friends of Bush Hill Park, Carole Stanley, explained that the Friends group will be running a project in collaboration with George Spicer and Kingsmead Schools to design a number of signs for the park which will celebrate the park’s biodiversity and direct people to the wildlife garden, also maintained by the Friends group.

The projects will complement the aims of improving the park for the benefit of the whole community and promoting the health and well-being aspects of it.

At the same time, Enfield Council has launched a Schools Climate Action Handbook, which aims to support schools on their climate action journey with helpful information and resources. In addition, with the tree planting season fast approaching, there will be many opportunities for schools, volunteers and other organisations to get involved in projects all around the borough.  Enfield Council is committed to becoming a carbon neutral organisation by 2030 and for the borough to follow suit by 2040. To read about Enfield Council’s Climate Action plans, go to www.enfield.gov.uk/climateaction.

The artist took five days to fully complete the painting, documenting her progress each day on social media. Users of the park were also able to observe her at work and watch the painting take shape.  The Friends of Bush Hill Park officially unveiled the mural painting at an extended litter picking event on 19 September.