We're working with residents to make our streets quieter and safer through our Quieter Neighbourhoods project.

We will look at a range of options that consider the geographical nature and type of road network in each individual area. We will be careful to not introduce a measure on one residential road that negatively impacts another road nearby. We want to adopt a 'low traffic neighbourhood' approach, where 'through' motor vehicle traffic is discouraged or removed.

The project aims to:

Quieter Neighbourhoods and the wider Healthy Streets programme will advance our aim to see more people walking, cycling or using public transport for short trips in the borough. Long-term benefits will include better public health, reduced pressures on the NHS, less motor vehicle pollution and improved air quality, which will also help deal with the declared climate emergency.

Our vision for Quieter Neighbourhoods in Enfield

This is a long-term project, aligned with the Mayor's Transport Strategy 2018, which aims to achieve 80% of trips by walking, cycling or public transport by 2041. Delivering quieter neighbourhoods across the borough and making our residential areas safe for all road users requires a long-term commitment and programme of work.

We will be taking a phased approach, focusing initially on areas located along the major cycling and walking infrastructure recently delivered.

Projects will involve a series of stages:

Each area will have its own project hosted within the 'Neighbourhoods Project Hub' of Let's Talk Enfield. 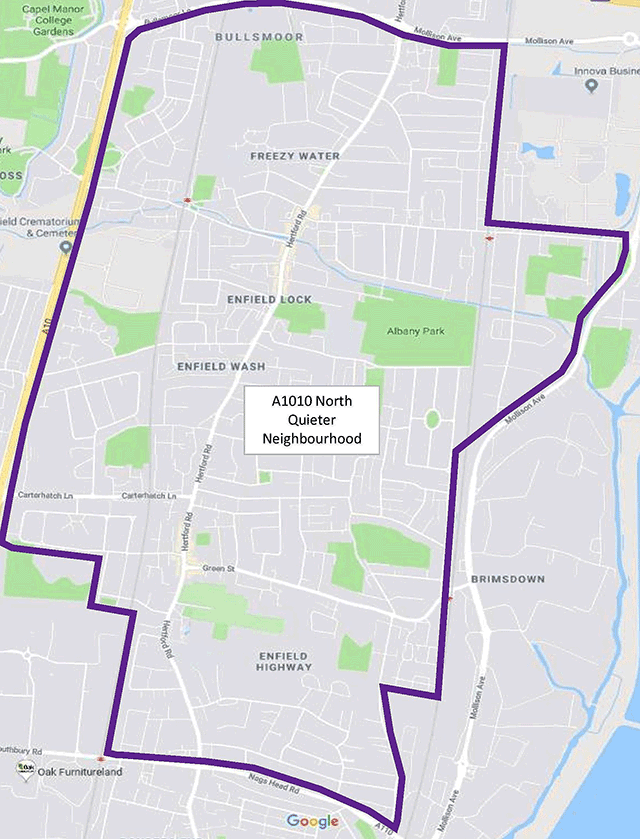 This area is likely to include several sub areas.

Updates will be provided on Let's Talk Enfield.

A series of initial steps have already been taken for the Bowes area, which include a width restriction on Warwick Road and Controlled Parking Zone proposals.

We are also working with Transport for London and Haringey Council, to carry out a further study focusing on Palmerston Road and the surrounding area. The Quieter Neighbourhood work will build on this and consider the feasibility of introducing low traffic neighbourhood zones within the area.

Some issues are already well known, but to ensure everyone in the community has a chance to comment, we will carry out stage 1 of this project to understand issues residents experience in the area. The programme will then be developed further. 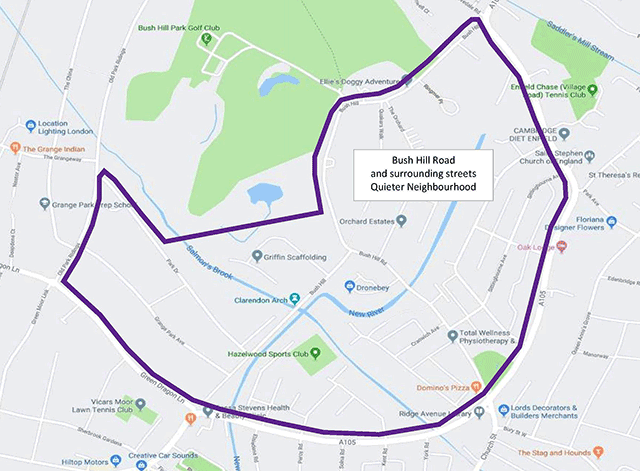 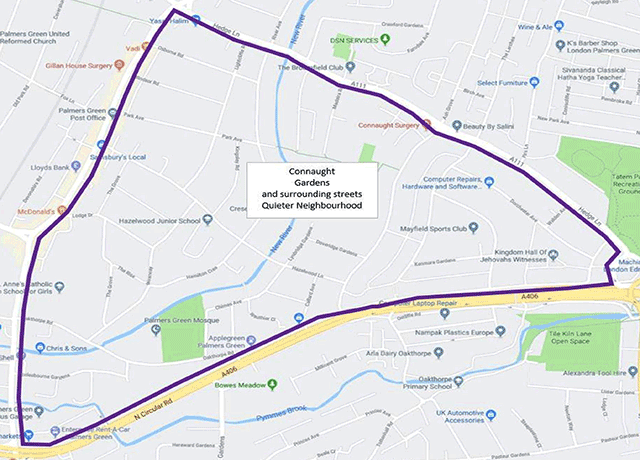 A series of width restrictions have been introduced in this area. Further measures were originally proposed and have now been reviewed, taking into consideration the Fox Lane experiences. This project will continue at stage 3.

Updates will be provided on Let's Talk Enfield. 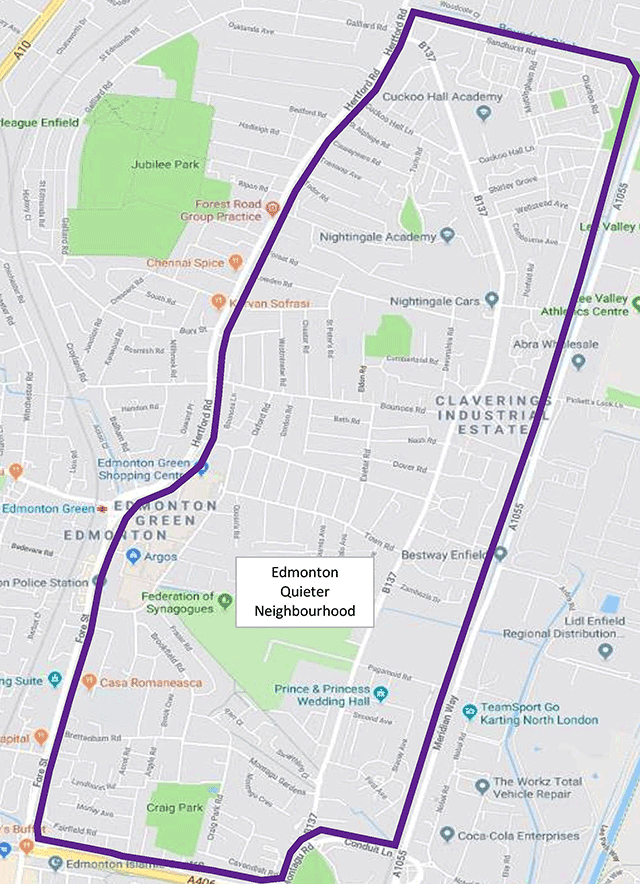 This area is likely to include several sub areas. Updates will be provided on Let's Talk Enfield. 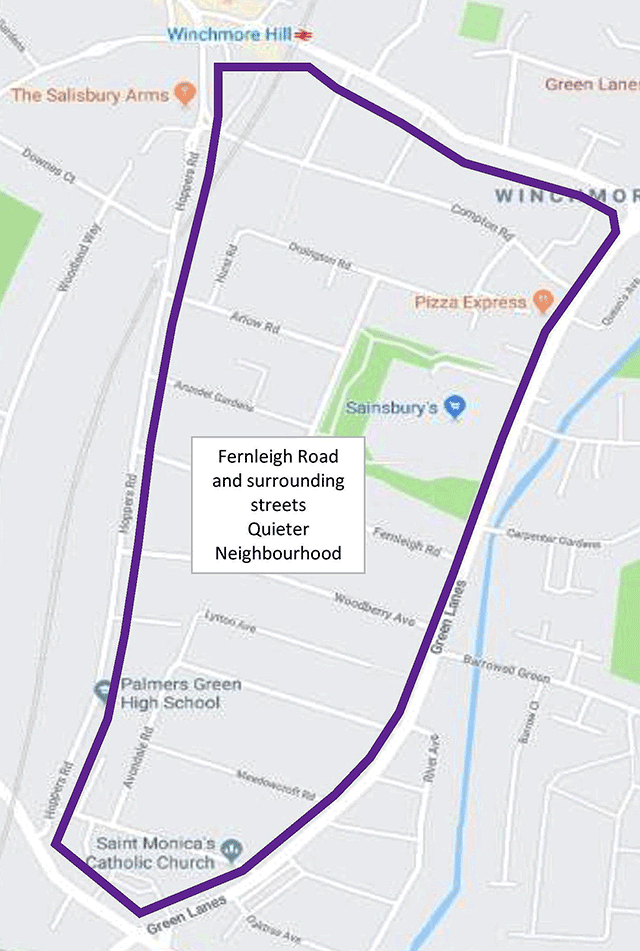 This project is finished and includes a 20mph zone and experimental point no entry feature on Stonard Road. This is currently being monitored, and residents can share their views via the engagement hub. 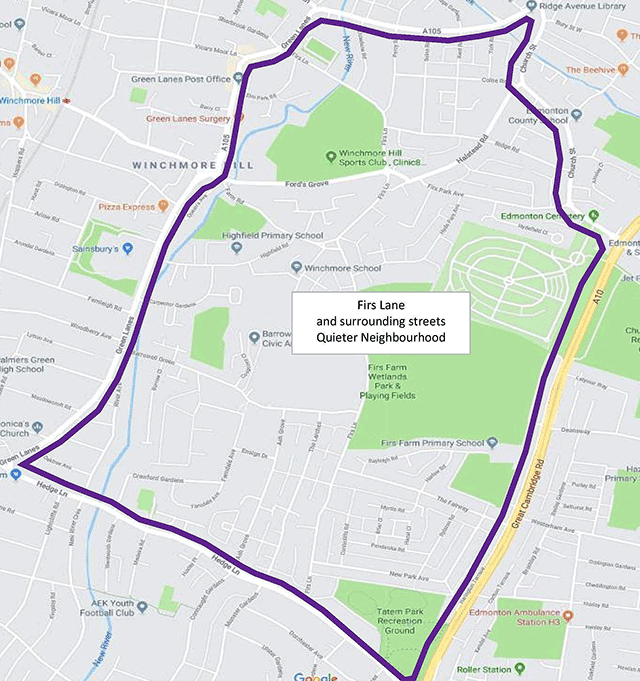 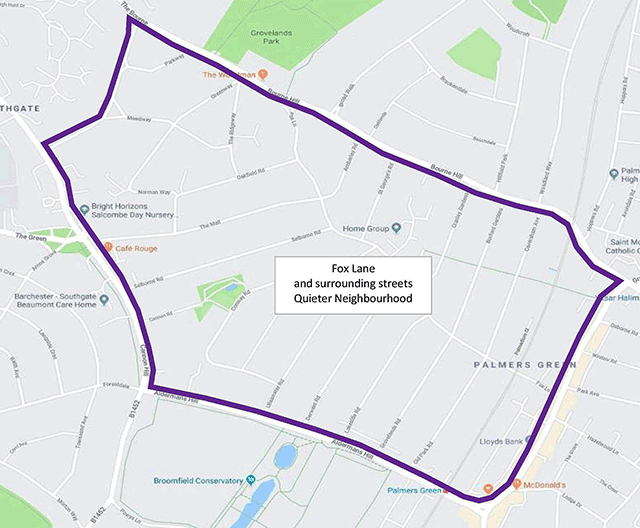 Fox Lane had some initial trials and we are now reviewing the original proposals with a view to introducing a low traffic neighbourhood across the area. Once this feasibility work is finished, we will host a community event to share further plans and an opportunity for comment (stage 3).

A review of the traffic and parking problems in the Raynham Road area is also currently in progress. This study will include a range of measures for re-balancing streets in the area, to reduce traffic and make them healthier for local people. We will involve the community in the development of specific proposals, with engagement planned to start later this year.

Future phases will be developed as existing projects are progressed. We expect most of the work for phases 1 to 4 to finish in 2022, and further areas to begin after that.

There is a separate road safety programme that could provide a short-term response to areas of concern not in the initial Quieter Neighbourhood areas. Road safety projects are taken forward using an evidence-based approach, with resources allocated to sites where recorded data reveals patterns of personal injury incidents.

If you have an idea for a future area of focus for the Quieter Neighbourhood programme, email healthystreets@enfield.gov.uk.